The last time I had a real cheeseburger, it was 1999. I had already been a vegetarian for a while, but I wanted to see what it felt like. The burger tasted great, but I felt a real internal dilemma seeing the hanging carcasses at Fuddruckers and I ended up vomiting. My conscience was telling me something, through the upchuck, and I havent eaten one since. Back then, meat substitutes looked and tasted like salted cardboard. I ate those vegetarian burgers anyways, and while they never induced vomiting, I have always suspected that fake meat isnt actually much better for you than than red meat. So I looked into the health implications of today’s veggie burger stars: the Impossible Burger and its plant-based peers.

Lisa Drayer, a nutritionist and health journalist, recently concluded on CNN that if you are choosing to eat these burgers solely for their health value, you may want to reconsider. Strayer contends that while the newfangled flesh-like burger substitutes in the Impossible and Beyond burgers are better than beef for the environment, theyre not likely great for your body.

For reference, the American Heart Association suggests that adults have no more than 1,500 mg of sodium in a day, so both of these burgers would account for a large chunk of your daily sodium intake. If you add a single slice of Chao vegan cheese, my personal fave, at 180 mg, and an Udis GF bun at 350mg, youre up to 920 mg of sodium, almost two-thirds of your recommended daily intake in one sandwich. You might be compelled to hold the ketchup, and definitely the fries. 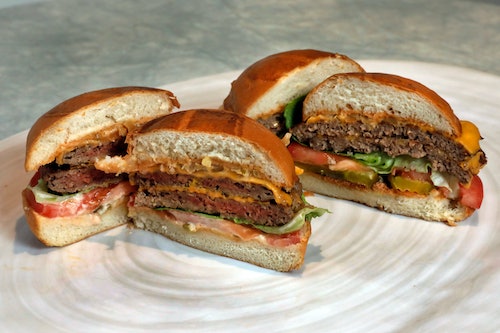 Whats wrong with heme, besides the disturbingly multisyllabic chemical ingredients? Well, it wasnt approved for human consumption by the FDA until last summer, and its still not approved to be used as a color additive and sold in grocery stores. So basically, were just beginning to see what these ingredients can do to our bodies versus knowing the dangers of them intimately, like we do with red meat.

Not all fake meats are created equal, though, and while Impossible has some questionable additives, Jessica Blanchard, a New Orleans-based holistic nutritionist and dietician, feels that the Beyond Burger might be a decently healthy choice. While this assertion isn’t yet proven, she points to the fact that there aren’t as many scary ingredients, on the packaging, which feels reassuring.

Blanchard says, however, that if you want to enjoy any plant-based burger every now and then, the healthiest way would be to cut it in half, eat it with sprouted-grain bread, and heap on lots of veggies. My husband and I share a Beyond Burger every week or two.

Dont kid yourself. Fake meat is junk food, too. Thats kind of the point. But no animals were harmed making them and theyre better for the environment, and as Blanchard says, While these faux burgers aren’t the healthiest choice, they are far better than most processed foods.