As the world prepares to hear the truth about President Trumps Ukraine escapades, the Republican disinformation machine is gearing up for war. That’s because the impeachment inquiry is moving into a new phase, as House Intelligence Committee Chairman Adam Schiff announced Wednesday morning that public hearings will begin next week. First up will be Bill Taylor, the top U.S. diplomat in Ukraine, along with State Department official George Kent on Nov. 13. Two days later, Marie Yovanovitch, the U.S. ambassador to Ukraine who was ousted from her post, will testify. These announcements follow last weeks vote, in which the House codified the rules and regulations for witness testimony. This new stage will raise public awareness of the inquiry to new heights, as key players will be appearing on television and describing their first-person accounts of White House misconduct.

So far, Republicans have responded to the inquiry in a predictable way: rank character assassination. The facts of the case are damning: Multiple witnesses have described an obvious quid pro quo in which American military aid to Ukraine was held up by the Trump administration in exchange for political favors. Left with little else to attack, Republicans have tried in response to smear the people bringing light to the matter, in an effort to paint the inquiry as biased. Just last week, after Army Lt. Col. Alexander Vindman testified with first-hand knowledge about the existence of a quid pro quo with Ukraine, Republicans on Fox News tried to claim that because Vindman was born in Ukraine, he couldnt possibly be an objective witness. Its a game plan they are preparing to put into play once again.

The impeachment inquiry started because an anonymous whistleblower exercised his legal rights to anonymity and submitted a complaint about a phone call Trump had with Ukrainian President Volodymyr Zelensky over the summer. Whistleblower anonymity protections exist specifically to make sure that government officials feel safe coming forward if they feel something improper has taken place; by having the ability to formally sound the alarm without revealing ones identity, whistleblowers have more incentive to be totally honest.

Violating these regulations for political gain is the kind of behavior common in authoritarian states, where any criticism of a leader is forbidden. It goes against the fabric of American identity. And its exactly what Trumps allies are now gearing up to do.

Trump has consistently argued that even though most of the whistleblowers complaints have now been substantiated by publicly released information, the possibility that the whistleblower may have some sort of political bias against him renders the entire impeachment inquiry moot. Nevermind that no proven bias exists; nevermind that the facts of the complaint have been confirmed by Trump appointees and career diplomats alike.

Following the presidents lead, top supporters have begun urging the media to out the whistleblower. Kentucky Sen. Rand Paul has led the charge, claiming that he knows the persons name and threatening to leak their identity and issue a subpoena. “I’m more than willing to [reveal the name], and I probably will at some point, Paul told a reporter Tuesday. There is no law preventing anybody from saying the name.”

On Wednesday morning, Trumps eldest son Donald Trump Jr. took this ugly dance a step further, tweeting out to his 4 million followers a Breitbart article containing the alleged name of the whistleblower. About the backlash that ensued, Trump Jr. told a reporter, The outrage on this is BS, adding, The entire media is [triggered] that I (a private citizen) tweeted out a story naming the alleged whistleblower. Are they going to pretend that his name hasnt been in the public domain for weeks now?

Furthermore, The Daily Beast reported that House Republicans attempted to name the alleged whistleblower while interviewing Taylor, with the goal of getting the name into the public record. In response, Taylor said hed never heard of the person. 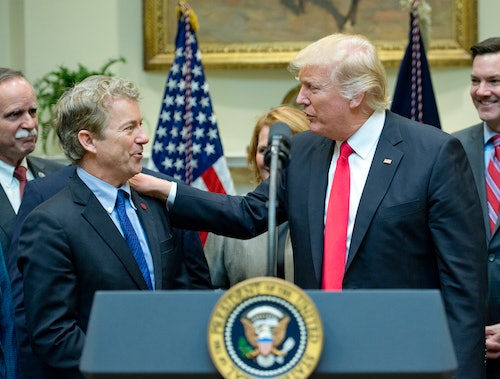 Whats so frustrating about this episode is the sense that Republicans are avoiding the rules and putting someones livelihood and possibly life in danger, just so that they can avoid having to defend Trump on substance. Its another distraction from the question of whether or not the president abused his office. Even if the whistleblower turns out to be a latte-sipping, Volvo-driving, Rachel Maddow-watching member of the #Resistance, that would in no way undercut the damning nature of the facts outlined by witnesses in sworn testimony, corroborated media reports, and the White Houses own summary transcript of the phone call. The whistleblower-unmasking spectacle is a charade meant to distract from the real scandal and the fact that youre reading about it right now means that, to some extent, its working.

“Identifying any name for the whistleblower will simply place that individual and their family at risk of serious harm, said the whistleblowers attorney Mark Zaid, speaking to CNNs Jake Tapper. We will not confirm or deny any name that is published but we will note publication does nothing other than show the desperation of a partisan crowd to deflect from the substance of the whistleblower complaint. It most certainly will not relieve the president of the need to address the substantive allegations, all of which have been substantially proven to be true.

Beyond setting the table for inevitable character assassination of the whistleblower, Trump Jr., Paul, and the president are intentionally building an environment that is threatening to other potential whistleblowers who might come forward. The alleged whistleblower is already being smeared across conservative media The Daily Beast reported that an aide to California Rep. Devin Nunes, Schiffs Republican counterpart on the Intelligence Committee, has been providing conservative politicians with misinformation about the person.

In this climate, the sacred duty of speaking truth to power will start to seem like more trouble than its worth for government employees who want to speak up. And, terrifyingly: Thats the point.