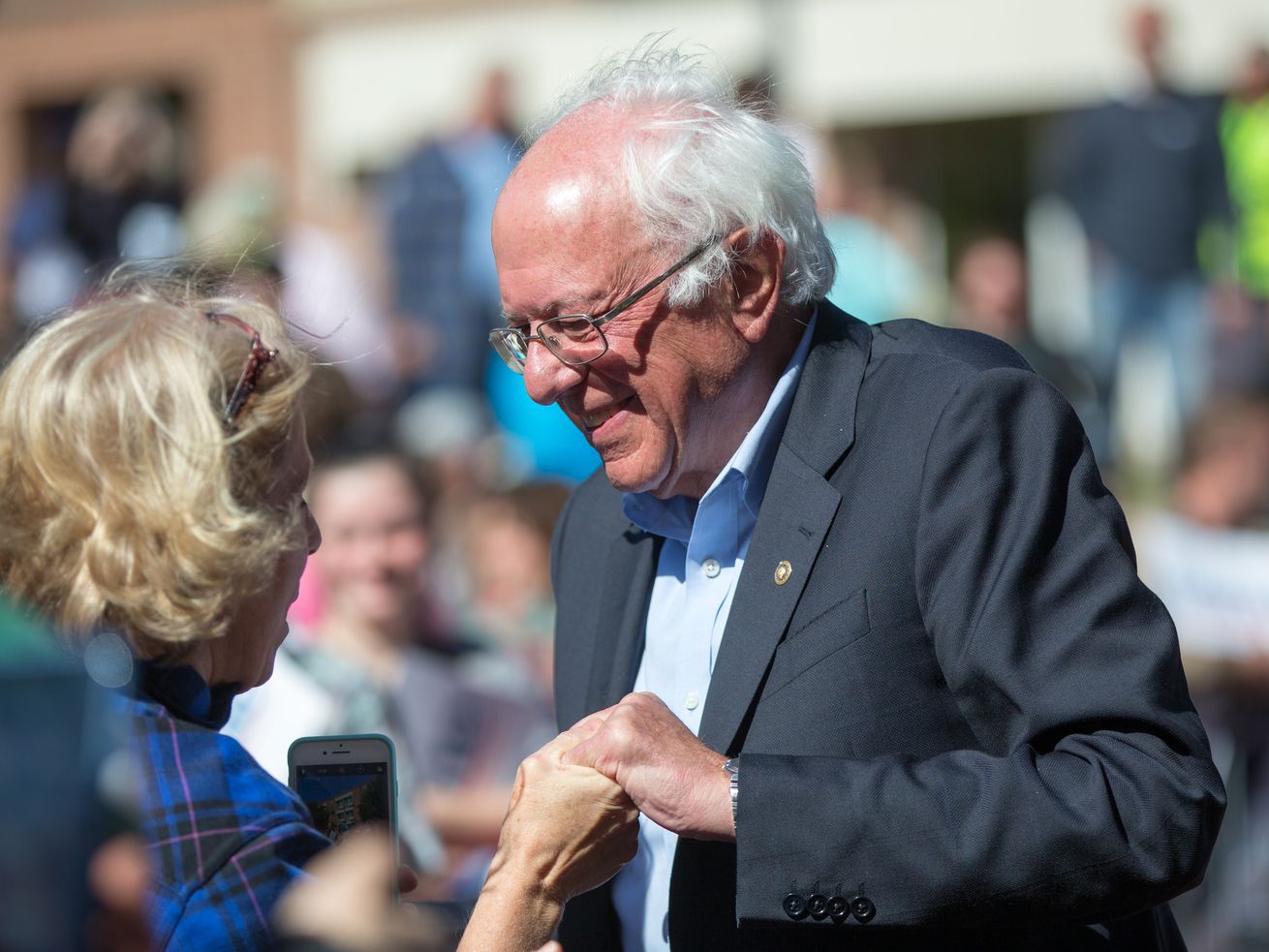 The Democratic candidate had a stent procedure this past week. His campaign revealed it was due to a heart attack.

Sen. Bernie Sanders’s campaign revealed on Friday that he had suffered a heart attack before the stent procedure he had earlier this week — a more detailed and concerning account of his health status than had been previously disclosed by his staff.

“After presenting to an outside facility with chest pain, Sen. Sanders was diagnosed with a myocardial infarction,” Arturo Marchand Jr. and Arjun Gururaj, the doctors who treated him at Desert Springs Hospital Medical Center in Las Vegas, said in a statement. A myocardial infarction is a medical term for a heart attack.

On Tuesday, Sanders asked for a chair from a campaign aide while taking questions and answers during a fundraiser in Las Vegas. He left the event soon after, and then reportedly became visibly uncomfortable in a car ride afterwards. He was taken to an urgent care facility, and then by ambulance to a hospital, where he received the stent procedure.

On Wednesday, his campaign said that he had been hospitalized after experiencing “chest discomfort” the day before, and that doctors had inserted two stents upon discovering a blockage in an artery. After the announcement, campaign aides had declined to answer questions about his diagnosis.

His campaign has not yet announced when he will resume a normal schedule, but he appeared to be in good spirits on Friday when he was released from the hospital. After droppings his bags off at his hotel, he took a stroll in a park with his wife.

Stent insertion is a routine procedure for cardiologists, and recovery time from the procedure itself is fast enough that some people go back to work the next day. But a heart attack might mean a longer recovery period.

“The first question is, how serious was the heart attack? What muscle was damaged and how will that affect the heart’s function?” Dr. Gilbert Tang, a heart surgeon at Mount Sinai Hospital in New York, said in an interview with the New York Times.

If only a small part of the heart muscle was damaged, full recovery is expected. But typically a cardiac rehabilitation program and a drug regime requiring monitoring is recommended even after more minor heart attacks, according to the Times.

“Recovery from a heart attack varies,” Jeremy Samuel Faust, a physician who practices emergency medicine at Brigham and Women’s Hospital in Boston and a columnist for Slate, wrote earlier this week, before Sanders’s heart attack was confirmed. “Often people are tired, and most can expect a reduction in their tolerance for exercise and stress. Some are immobilized and require prolonged rehabilitation. It’s also true that some patients bounce back quickly and essentially return to normal.”

The campaign’s decision to delay announcing the fact that Sanders experienced a heart attack until Friday raises questions about its transparency with the public, and whether the information was delayed in order to minimize speculation as to Sanders’ fitness for the campaign trail.

“Discharge is the best time to give the most accurate and up to date information,” a campaign aide told Vox.

Sanders is in a precarious position

The heart attack came at a difficult moment for the Sanders campaign. Sanders pulled in $25.3 million in fundraising in the past quarter, putting him ahead of his primary rivals Sen. Elizabeth Warren and former vice president Joe Biden, but there are signs that his campaign is lagging.

Sanders has been stuck in a plateau in national polls for several months, and his chief competitor for the progressive vote in the Democratic primary, Warren, has been steadily climbing. Warren is even inching past Sanders in New Hampshire, the first-in-the-nation primary where Sanders’ decisive victory over Hillary Clinton in 2016 kicked off his surprisingly strong performance in that year’s nominating contest.

Sanders has also had some conspicuous campaign shake-ups recently: In September he scrapped his New Hampshire state director, and he parted ways with a deputy field director in Iowa.

Sanders’ health crisis likely doesn’t help his situation. Political analysts say that it’ll underscore concerns that his age and health — Sanders is 78 years old — might hamper his ability to fight Trump should he win the nomination, or interfere with his leadership abilities (and longevity) while in office, should he win the White House. Even if voters are not yet concerned about it, it could serve as ammunition for his rivals, although Biden, at 76, and Warren, who is 70, might not be eager to raise the issue of age.

At the moment, the Sanders campaign is projecting confidence. The campaign has announced that Sanders will be at the next Democratic presidential debate on Oct. 15.

“After two and a half days in the hospital, I feel great, and after taking a short time off, I look forward to getting back to work,” Sanders tweeted Friday evening.