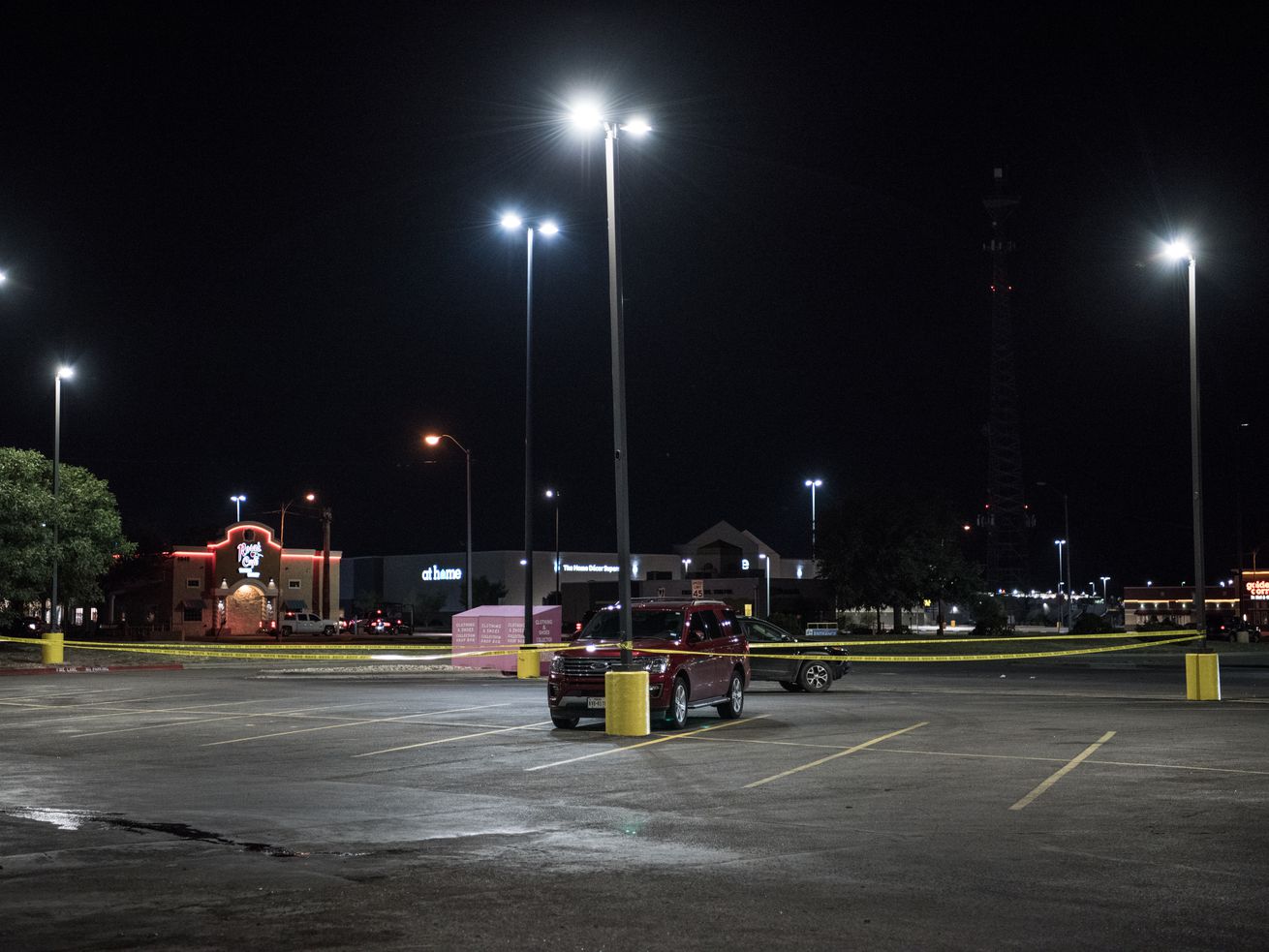 Police tape cordons off an area in which a number of people were shot in Odessa, Texas on August 31, 2019. | Cengiz Yar/Getty Images

A shooting in Odessa, Texas killed at least seven less than a month after a shooting in El Paso killed 22.

Following a mass shooting that killed at least seven and injured at least 21 near Odessa, Texas on Saturday, lawmakers demanded change and offered condolences, but failed to coalesce around any bipartisan solutions to the epidemic of gun violence. Instead, they took to their usual rhetorical corners.

On one side, Democrats, including presidential hopefuls, called for gun reform. Democrats have routinely done so following mass shootings, but little progress has been made in enacting sweeping new gun laws. And given their lack of a majority in the Senate and President Trump’s seeming lack of interest in the matter, it does not appear likely Democrats will succeed in making gun reform a reality this time, either.

One the other side of the aisle, Republicans called for prayers and cultural shifts. Some also blamed mental illness for US gun deaths, as President Trump did following in early August back-to-back mass shootings in El Paso, Texas and Dayton, Ohio. Research has countered this narrative, showing those with mental illness are more likely to be victims of gun violence than they are mass shooters; the argument remains a popular one with Republicans despite this data, however.

After the shootings in El Paso and Dayton that left 31 people dead, many people called for gun reform, including Trump, who signaled that he was open to expanding background checks on gun purchases. Ultimately, Trump changed his mind about that, saying that the country already has strong background checks in place.

Congress was unable to send anything to the president’s desk for consideration because it was in recess. Some Democrats, including Ohio’s Sen. Sherrod Brown and presidential candidate Sen. Bernie Sanders (I-VT), called on Senate Majority Leader Mitch McConnell (R-KY) to reconvene lawmakers in an emergency session to pass new gun laws, but those calls went unanswered.

In the wake of this weekend’s shooting — and another shooting in Mobile, Alabama during a high school football game, in which 10 people were injured — this pattern appears to be repeating itself.

First came the heartfelt responses. “We will not allow the Lone Star State to be overrun by hatred and violence,” said Texas Gov. Greg Abbott in a statement. “We will unite, as Texans always do, to respond to this tragedy.”

Rep. Mike Conaway, who represents Texas’ 11th District — which includes Odessa and the surrounding areas where the shooting took place — tweeted that he was praying for the first responders and the loved ones of the victims.

Suzanne and I are praying for our men and women in blue, victims, first responders on scene, hospital staff preparing for the worst, and loved one’s of ALL affected by this senseless act of violence in Midland/Odessa. STAY SAFE and STAY INFORMED.

Our hearts are with Midland, Odessa, and everyone in West Texas who has to endure this again. More information is forthcoming, but here’s what we know: We need to end this epidemic. https://t.co/ytWLcg7y20

Another Democratic candidate, Sen. Kamala Harris (D-CA), said on Twitter, “America is sick of this. We need to act.” On Facebook, candidate Julián Castro wrote: “More will continue to die, every single day, until we actually do something.”

President Trump first reacted to the shooting on Twitter as spokespeople for the president said he was monitoring the situation. On Twitter, Trump said he had been briefed on the incident by Attorney General William Barr, and promised there would be “more to follow.”

Just briefed by Attorney General Barr about the shootings in Texas. FBI and Law Enforcement is fully engaged. More to follow.

However, what followed was a Sunday morning in which Trump tweeted quotes from Fox News critical of former FBI director and his frequent foil James Comey. He also praised himself for his work on The Apprentice. After sending a tweet about opioids and retweeting information about Hurricane Dorian, Trump finally sent his second message on the shooting late Sunday morning, saluting law enforcement and calling the incident “a very tough and sad situation.”

Great job by Texas Law Enforcement and First Responders in handling the terrible shooting tragedy yesterday. Thank you also to the FBI, @GregAbbott_TX and all others. A very tough and sad situation!

The president later addressed reporters following a weekend at Camp David, saying his administration is “looking at a lot of different things” and various “ideas, concepts” around gun reform. He ruled out new laws on background checks, however, arguing, “As strong as you make your background checks, they would not have stopped any of it,” and calling gun violence — as he has in the past — “a mental problem.”

Speaking to reporters at Joint Base Andrews on Saturday, Vice President Mike Pence said he and the Trump administration are “absolutely determined to work with leaders in both parties in Congress to take steps that we can address and confront this scourge of mass atrocity in our country.”

Will Congress act this time?

As lawmakers demanded action, praised first responders, and called for thoughts and prayers, Democrats and members of their base began to blame Senate Majority Leader Mitch McConnell for a lack of movement on gun reform.

On Twitter, #MassacreMitch began trending as users demanded the senator call the Senate back into session to allow a gun reform bill that has already passed the House of Representatives to come up for a vote on the upper chamber’s floor.

McConnell has pushed back against such calls before, arguing that even if the bill were to pass, President Trump wouldn’t sign it, making a vote a waste of time.

Despite this, Senate Minority Leader Chuck Schumer (D-NY) and House Leader Nancy Pelosi (D-CA) both called on their colleagues, and McConnell specifically, to return from a Labor Day recess to vote on that House bill — H.R. 8 — which would expand background checks on gun purchases. It was passed by the Democratic-controlled House in February.

Our thoughts are with the victims, their families, & everyone injured in the shooting in Odessa & Midland, TX.

Thank you to the first responders who risked their lives to stop the threat.@senatemajldr should bring up H.R. 8 the week Congress returns. We must #endgunviolence.

Enough is enough. Every day, the gun violence epidemic inflicts a devastating toll in communities across America, this time
in West Texas. The @SenateGOP must end its obstruction & finally pass House-approved legislation to #EndGunViolence. https://t.co/RcoVI6Eebm

McConnell resisted calls to cut Congress’ recess short in early August, and seems unlikely to respond to Democrats’ request he do so this time. He has yet to tweet about the incident or release a public statement about Odessa, although he did call the El Paso and Dayton shootings “sickening” shortly after they occurred.

“We stand with law enforcement as they continue working to keep Americans safe and bring justice,” he wrote in early August.

Some lawmakers put such pressure on McConnell following those two shootings because they feared political will to enact change would have waned by the time Congress resumed its work in September. Now that another shooting has occurred, it remains to be seen whether lawmakers will convert the latest round of outrage and requests for prayers into legislative action. If history is any guide, they will not.

The Odessa shooting is the latest in a line of mass shootings in Texas.

In fact, four of the 10 deadliest mass shootings in modern US history — including the El Paso shooting that left 22 dead — have occurred in Texas. In November 2017, a man murdered 27 inside a church in the small town of Sutherland Springs. In 1991, a man opened fire on a restaurant in Killeen, near Fort Hood, killing 23. And in 1966, a sniper at the University of Texas killed 18.

Despite this history, however, Texas has recently loosened its gun laws. A new set of laws has gone into effect today, one day after the Odessa shooting, that ban schools and private apartment buildings from prohibiting gun owners from storing their weapons in those spaces. The new laws also make it easier for people to bring guns into houses of worship and foster homes.

It is not clear whether the latest shooting will move state lawmakers to amend these laws; in the past, Gov. Greg Abbott has encouraged gun ownership, at one point telling his fellow Texans to “pick up the pace” of their gun purchases because he was “embarrassed” California was leading the US in gun sales.

And at least one Texas politician has made it clear that the Odessa shooting has not increased his appetite for gun reform. In a long thread on Twitter, state Rep. Matt Schaefer, who represents an East Texas district, wrote, “I am NOT going to use the evil acts of a handful of people to diminish the God-given rights of my fellow Texans.” He followed that by writing, “I say NO to “red flag” pre-crime laws. NO to universal background checks. NO to bans on AR-15s, or high capacity magazines. NO to mandatory gun buybacks.”