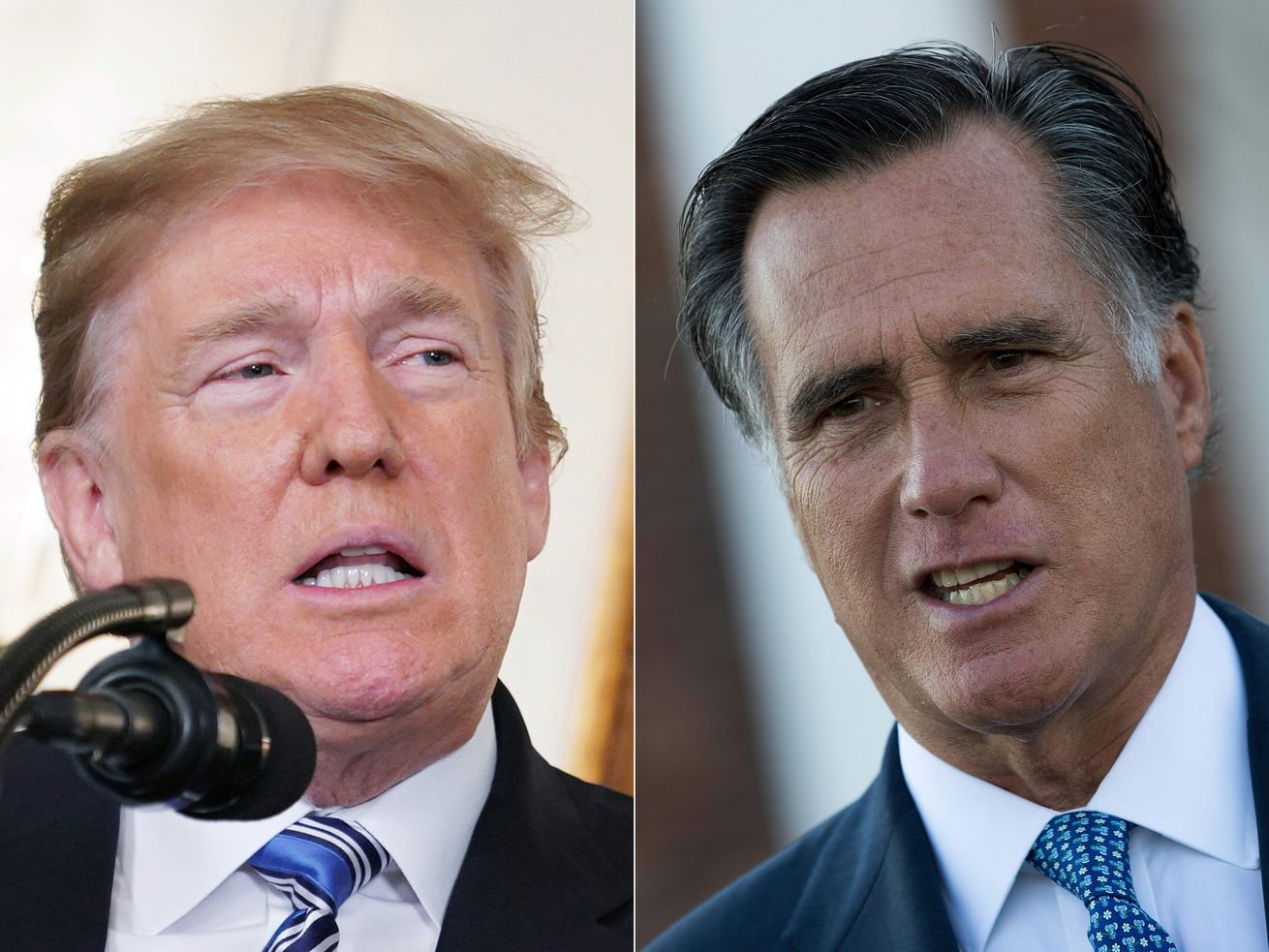 The Utah senator criticized Trump’s conduct — and Trump has responded with some angry tweets.

President Donald Trump unleashed a load of venom on Sen. Mitt Romney (R-UT) over the course of several hours on Saturday, deeming him a “a pompous ‘ass’” and even calling for him to be impeached on Twitter.

The tweets came in response to Romney’s sharp criticisms the previous day of the president’s appeal to foreign countries to conduct investigations into Democratic presidential candidate Joe Biden, a potential political rival in 2020. “By all appearance, the President’s brazen and unprecedented appeal to China and to Ukraine to investigate Joe Biden is wrong and appalling,” Romney tweeted on Friday.

The acrimonious exchange is the latest turn in the up-and-down relationship between the two men, who share a party but are miles apart on questions of style, propriety, and adherence to institutional norms.

The vehemence of Trump’s tweets also served as a signal to other GOP lawmakers that Trump is willing to direct his ire at them if they step out of line and offer a hint of support to Democrats’ impeachment efforts against him. (And regarding Trump’s retaliatory impeachment plan: technically a senator can’t be impeached, but they can be expelled by a vote in the upper chamber.)

Somebody please wake up Mitt Romney and tell him that my conversation with the Ukrainian President was a congenial and very appropriate one, and my statement on China pertained to corruption, not politics. If Mitt worked this hard on Obama, he could have won. Sadly, he choked!

I’m hearing that the Great People of Utah are considering their vote for their Pompous Senator, Mitt Romney, to be a big mistake. I agree! He is a fool who is playing right into the hands of the Do Nothing Democrats! #IMPEACHMITTROMNEY

Romney accepted Trump’s 2018 endorsement, but has become a Trump critic in the Senate

The Utah senator has had a complicated relationship with Donald Trump.

When Romney made his second bid for the White House in 2012, Trump endorsed him and called him more “presidential” than Barack Obama. But after Romney lost the election, Trump criticized him for his loss.

In 2016, Romney wasn’t so keen on backing Trump when he emerged as the GOP’s presidential nominee. He expressed concern about Trump’s vulgar and racist remarks on the campaign trail, and pleaded to the public to consider other nominees.

But when Trump won the election, Romney famously sat down for dinner with Trump to discuss a potential position in Trump’s White House, and told reporters that Trump was “the very man who can lead us.”

It didn’t work out, but that dinner signaled a détente. While Romney did criticize Trump during his first two years in office — most notably for his handling of the white supremacist rally in Charlottesville in 2017 — he clearly foresaw a benefit to not taking his condemnations too far.

Trump endorsed Romney for Senate in 2018, and Romney happily accepted it. The reason was simple: it was in both politicians’ interest to do so.

But Romney’s relationship with Trump while in the Senate has been a mixed bag. Right before he was sworn in, he wrote an op-ed for the Washington Post criticizing Trump’s character. “With the nation so divided, resentful and angry, presidential leadership in qualities of character is indispensable. And it is in this province where the incumbent’s shortfall has been most glaring,” Romney wrote in January 2018.

But Trump’s latest behavior calling for Ukraine and China to conduct investigations of Biden could potentially cross a red line for Romney.

Normally Romney impugning Trump for issues of character while going along with him on policy wouldn’t amount to much, but the timing of his criticism may be crucial. Democrats have opened an impeachment inquiry into Trump’s behavior, and should House Democrats choose to impeach Trump, then Republican unity in the Senate will be crucial to ensuring Trump isn’t removed from office.

So far though, Romney has been a fairly lonely voice among his GOP peers. Other than Romney’s broadside, the most pointed Republican criticism of Trump’s appeal to China to date has come from Sen. Ben Sasse of Nebraska.

“Hold up: Americans don’t look to Chinese commies for the truth,” Sasse wrote in a statement to the Omaha World-Herald Thursday in response to Trump’s call for China to investigate Biden. “If the Biden kid broke laws by selling his name to Beijing, that’s a matter for American courts, not communist tyrants running torture camps.”

But Sasse went out of his way to ensure that this wasn’t interpreted as siding with the Democratic impeachment inquiry. He accused House Intelligence Chairman Adam Schiff (D-CA) of “running a partisan clown show.”

Romney not only has a uniquely tense relationship with Trump, but he’s also being unusually blunt in his criticism of Trump’s conduct. Trump is responding with tremendous force, and in the process he’s warning other Republicans that they could be the target of his wrath too if they step too far out of line.