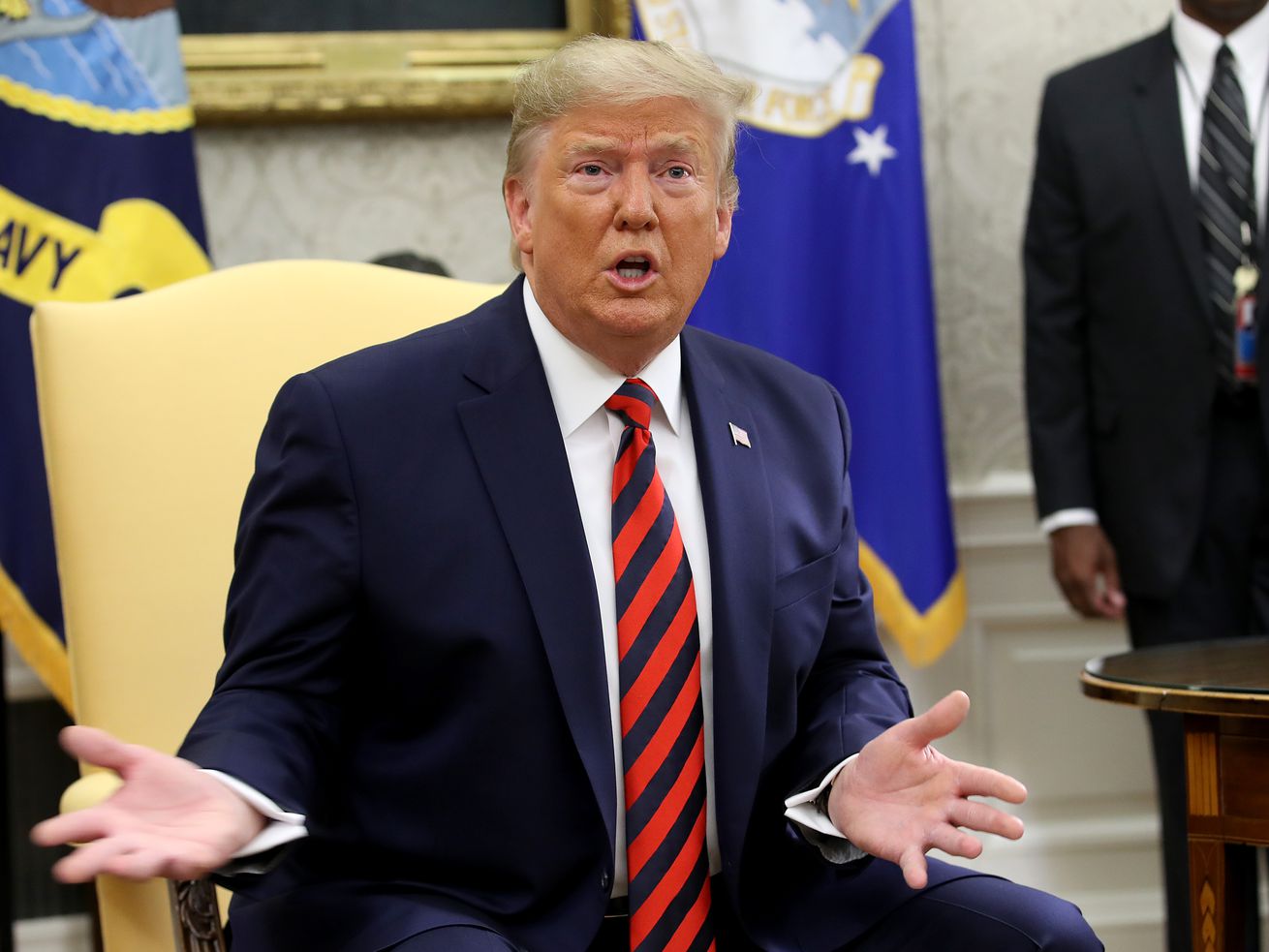 President Donald Trump has sanctioned Turkey for its Syria invasion, a little more than a week after appearing to give Ankara the go-ahead to launch its long-planned operation.

Trump issued an executive order on Monday that imposed penalties on three Turkish officials and two ministries for their role in the incursion into Syria. The president also announced in a statement Monday that he was reimposing steel tariffs of 50 percent on Turkey and would halt trade negotiations with the country immediately.

“Turkey’s military offensive is endangering civilians and threatening peace, security, and stability in the region,” Trump said in a statement. “I have been perfectly clear with President [Recep Tayyip] Erdogan: Turkey’s action is precipitating a humanitarian crisis and setting conditions for possible war crimes.”

Turkey began its assault in northern Syria last week, after the United States withdrew its troops from Kurdish-held areas close to the Turkish border. The Trump administration said it did not approve or endorse the operation, but the removal of US forces gave Turkey the opportunity to press into Syria. It’s something Turkish President Erdogan has been eager to do in order to push back the Kurdish militias he sees as an existential threat, and to establish a “safe zone” to resettle millions of Syrian refugees who fled to Turkey throughout the civil war.

The US’s decision to relocate those troops was met with immediate condemnation, as both Republicans and Democrats saw the Trump administration as abandoning the Syrian Kurds, America’s most effective partner in fighting ISIS and defeating its territorial caliphate. And, as Turkey moved deeper into Syria, Secretary of Defense Mark Esper announced Sunday that the remaining 1,000 troops in northeastern Syria would withdraw, leaving the Kurds totally on their own and creating a potential security vacuum.

Trump’s executive order, then, comes after the situation on the ground in Syria has changed dramatically — and after Turkey’s invasion has already displaced tens of thousands of civilians, prompted the escape of ISIS detainees, and forced the Kurds to cut a deal with Syrian President Bashar al-Assad, rearranging alliances within Syria.

So the bad things everyone predicted would happen once Turkey invaded have started to happen. Trump previously promised to “totally destroy and obliterate the Economy of Turkey” if the country did anything he considered off-limits, but it’s not clear how effective these sanctions will be in tackling the current crisis in Syria that Turkey’s offensive has unleashed.

Still, the sanctions and tariff increase are definitely coming at a bad time for Turkey. Turkey’s economy is under strain, and that’s put a lot of domestic pressure on Erdogan. That’s partly why he was motivated to enter Syria now; Turkey’s financial crisis has increased the backlash against the nearly 3.6 million Syrian refugees in the country, and Erdogan wants to deliver on his promise to resettle them.

These sanctions will also hurt US-Turkey relations, as Vox’s Alex Ward pointed out this week, with the US directly targeting a NATO ally. Erdogan was also expected to visit the White House next month, and it’s not clear the status of that meeting.

Beyond sanctions, Vice President Mike Pence said Monday that he and National Security Adviser Robert O’Brien would be leading a delegation to Ankara to try to broker a ceasefire. Pence said the president had spoken to Erdogan on Monday and “called on the president of Turkey to stop the invasion.”

Some EU countries, including Germany and France, have suspended weapons exports to Turkey in the wake of the invasion. Congress also has a plan to punish Turkey, though Trump’s executive order will go into immediate effect.

But, so far, Erdogan looks undeterred by the penalties from America and some of its allies. “We have seen all the threat from sanctions to embargoes just because we fight against terrorism,” Erdogan said Tuesday, according to the Telegraph.

Late Monday, Erdogan published an op-ed in the Wall Street Journal that defended Operation Peace Spring, as the Syria offensive is called. He argued that Turkey was stepping up where the rest of the international community failed. “My administration concluded that the international community wasn’t going to act, so we developed a plan for northern Syria,” Erdogan wrote, adding that the goal of the mission was to “remove all terrorist elements in northeastern Syria.”

Here, Erdogan is referring mostly to the Syrian Kurds, who have ties to PKK, an insurgent group in Turkey that Ankara considers a terrorist group.

“Our mission is simultaneously to combat the Kurdistan Workers’ Party, the terrorist organization known as the PKK, along with its Syrian affiliates and Islamic State,” Erdogan wrote. “Turkey has no argument with any ethnic or religious group. From our perspective, all citizens of the Syrian Arab Republic—who don’t belong to terrorist groups—are equal.”

Even though Erdogan is arguing that he’s just on an anti-terrorist mission, Turkey’s assault on Syria is likely to have dramatic consequences for the civilians who live there. The UN estimates that 100,000 people have been displaced, though Kurdish authorities put that number closer to 300,000.

Trump’s sanctions move also comes amid reports that Russian forces are patrolling areas just evacuated by US troops as Turkish and Syrian forces try to snatch up territory once held by the Kurds — a sign that the Syrian war has entered a new phase.