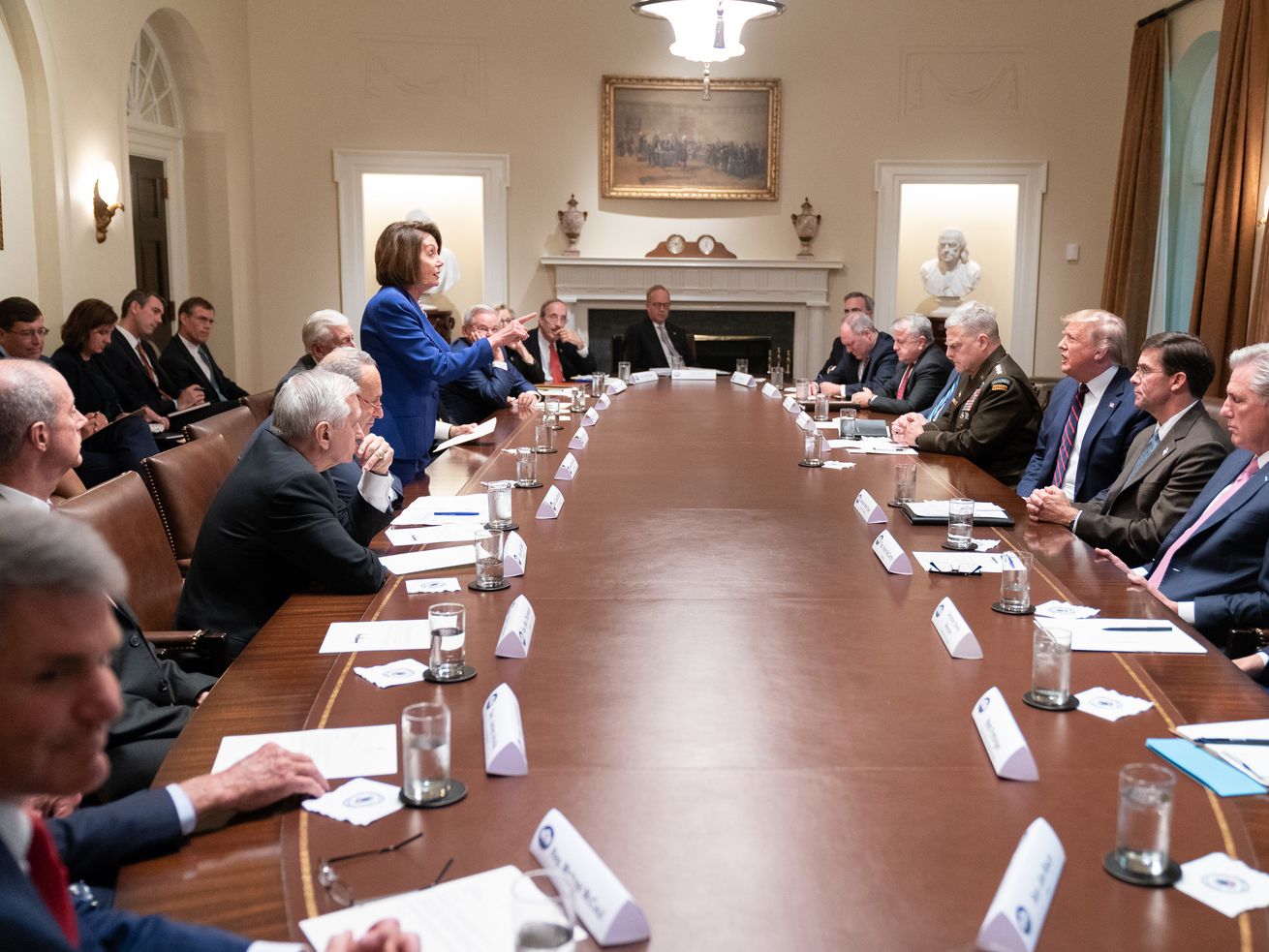 A photo tweeted by President Trump on Wednesday shows House Speaker Nancy Pelosi chastising him while others look on at a White House meeting. | White House photo by Shealah Craighead

Trump tried to shame Nancy Pelosi by tweeting a photo of their meeting. It backfired.

President Donald Trump on Wednesday night tweeted what he must have felt was an effective zinger against House Speaker Nancy Pelosi.

The two had been part of a meeting earlier that day on the withdrawal of US troops from Syria, which got so heated that Democrats in attendance ended up walking out. Pelosi told reporters the president had a “meltdown” and said “we have to pray for his health.”

Later on Wednesday, Trump tweeted a photo of Pelosi chastising him at the meeting, calling it “Nervous Nancy’s unhinged meltdown.”

However, “Nervous Nancy” is not what a lot of people saw in the photo. Instead, they saw a lone woman standing up to a roomful of men, giving them a piece of her mind. Soon, #PelosiOwnsTrump was trending on Twitter. The House speaker made the photo her Twitter cover image.

Asked about the photo at a press conference on Thursday, Pelosi said that during the meeting in question, she’d voiced concerns about Russian President Vladimir Putin’s influence over Trump and his foreign policy. At the moment the photo was taken, she said, “I was probably saying, all roads lead to Putin.”

Pelosi on “meltdown” pic Trump posted of their meeting: “I think I was excusing myself from the room.”

Says she shared concerns “about all roads leading to Putin, & if POTUS is saying, ‘I said during the campaign I was going to take the troops home,’ then is home Saudi Arabia?” pic.twitter.com/8gxorAf5Uh

Of course, the photo may have played well with Trump’s most ardent supporters. But the fact that Pelosi was able to use it so easily to her advantage is yet more evidence of a weakness with Trump’s approach — a lot of his alpha-male bullying tactics just don’t work very well on women. Unable to impugn their masculinity, Trump usually goes for attacks on their appearance or implying that they’re mentally ill. But women who have managed to attain positions of power in American society are used to these tactics — and, as Pelosi showed, they’re often more than capable of using Trump’s insults to their own advantage.

Trump met with Pelosi and other Democratic leaders Wednesday to talk about the situation in Syria, where the president’s decision to withdraw troops has left key US allies vulnerable to attack by Turkish forces, and sparked criticism among Democrats and Republicans alike, as Vox’s Ella Nilsen and Li Zhou explain.

“I pray for the president all the time and I tell him that,” Pelosi said at a press conference Wednesday afternoon, after the meeting. “I pray for his safety and that of his family. Now we have to pray for his health, because this was a very serious meltdown on the part of the president.”

Trump tweeted the photo that evening, presumably to show that it was Pelosi, not him, who had a “meltdown.”

But for a lot of people, the photo instead made Pelosi look brave and strong — “standing up and speaking up,” as Republican strategist Ana Navarro-Cárdenas put it, to Trump and the other men at the table.

I hope this picture of Nancy Pelosi, the sole woman at the table, standing-up and speaking-up, inspires other bad-ass women to run for office. pic.twitter.com/MQoIvCo4NJ

The term “badass” came up a lot.

She stood up to the bully.
She’s a bad ass. #PelosiOwnsTrump pic.twitter.com/7EyIzoYnbD

Democratic strategist Christine Pelosi, the speaker’s daughter, noted that she’d seen this side of her mom before.

Looks like she owned you on #NationalBossDay. Been there. Don’t mess with mama! https://t.co/8unyy930Dj

And the speaker made clear what she thought of the photo when she made it her Twitter cover image.

The president’s attempt to shame Pelosi likely worked among his base. But for most other Americans, it backfired. That should come as no surprise, given Trump’s track record with powerful women.

As I’ve written before, Trump’s strategy in confrontations with men is often to question their masculinity — he called Marco Rubio “Little Marco” and made fun of Jeb Bush’s supposedly “low energy.” It’s a style he’s likely developed in a long career in male-dominated spaces, from the military academy where he went to school to the heavily male real estate development business to the Hollywood sets where he bragged about being able to grab women “by the pussy.”

But that strategy doesn’t work on women, so Trump usually tries to invade their personal space, insult their appearance, or, as in the case of “Nervous Nancy,” insinuate that they are mentally ill or unstable. Any woman who’s gotten to where Pelosi is now, though, has had to put up with being called “crazy” a time or two. Except with people already primed to applaud Trump’s misogyny, the strategy is doomed to fail.

Of course, Trump still won the 2016 election. But it wasn’t because of his ability to square off with Hillary Clinton in one-on-one confrontation — most Americans thought she won the debates. And while Pelosi has taken plenty of criticism for her handling of Trump over the years, especially around impeachment, Trump’s latest attempt to paint her as having a “meltdown” only increased her support.

It’s a reminder as the country enters the 2020 Democratic presidential primaries with questions about whether a woman can beat Trump still circulating among the media and the public: Most of Trump’s tactics were honed over a lifetime of sparring and posturing with men. When he goes up against a woman instead, he’s out of his element — and it shows.