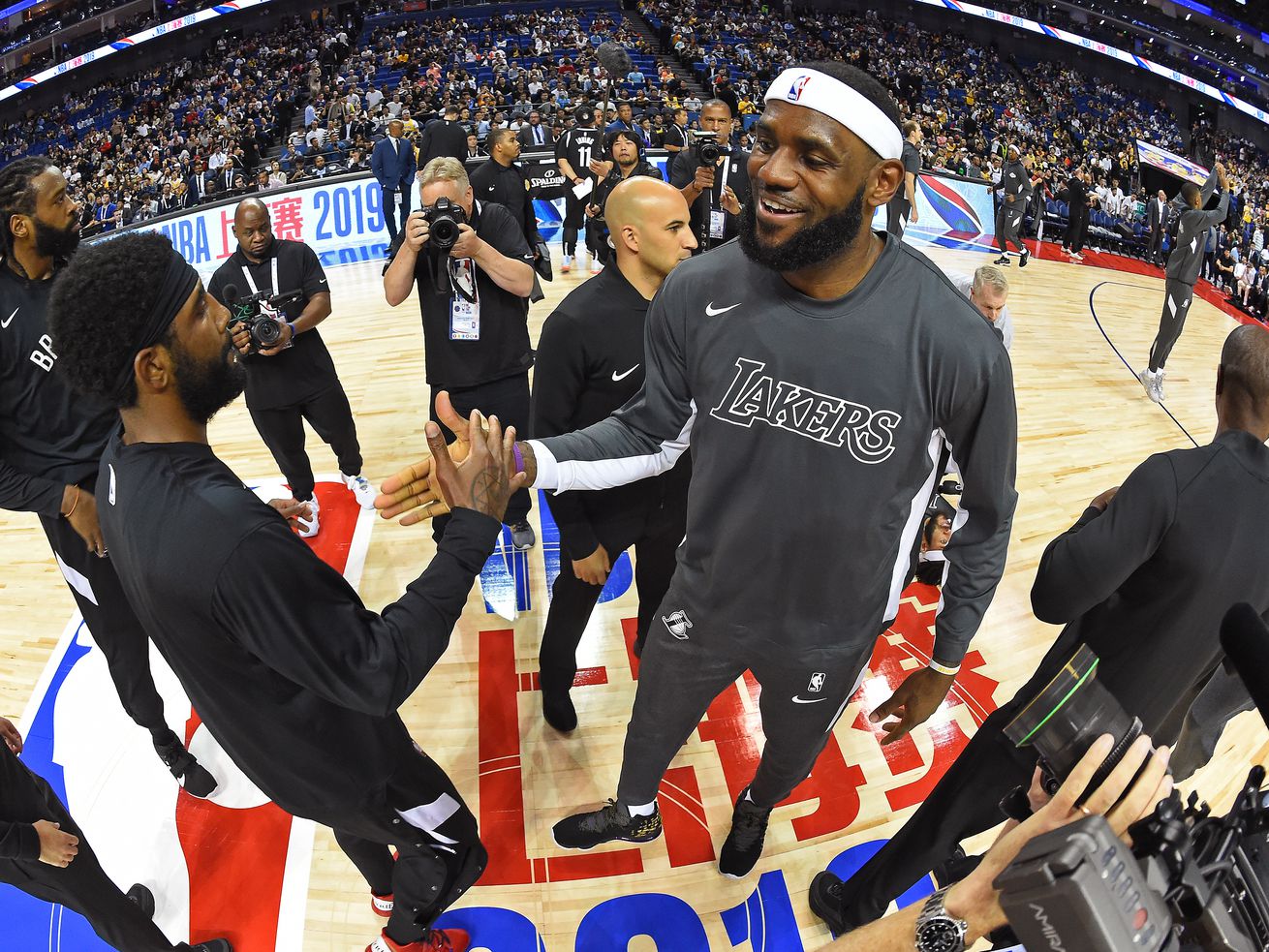 Kyrie Irving, #11 of the Brooklyn Nets, and LeBron James, #23 of the Los Angeles Lakers, shake hands at center court before a preseason game as part of 2019 NBA Global Games China on October 10, 2019 at Mercedes Benz Arena in Shanghai, China. | NBAE via Getty Images

LeBron James weighed in on the NBA’s China controversy. Now it seems like everyone’s mad at him.

LeBron James, the NBA’s biggest star, finally spoke Monday about the league’s free speech crisis over the Hong Kong protests — and it didn’t sit particularly well with anyone.

The NBA has been in turmoil since October 4 when Houston Rockets general manager Daryl Morey tweeted support for the pro-democracy protesters in Hong Kong, as Vox’s Matt Yglesias previously explained. Chinese entities responded by canceling TV coverage of exhibition games being played in the country and pulling sponsorship with the Rockets.

The NBA initially distanced itself from Morey, calling his statement “regrettable.” This, in turn, invited backlash from US fans and politicians of all beliefs, who see themselves in solidarity with the protesters fighting for self-determination.

LeBron’s Los Angeles Lakers were one of the teams in China when the Morey story exploded. But for a week, James — the four-time MVP, three-time champion, and biggest name in basketball — said nothing (and some of his team’s public events were canceled). On Monday, he spoke out via Silver Screen and Roll:

“I think when we all sit back and learn from the situation that happened, understand that what you could tweet or could say (could affect people),” James said. “We all talk about this freedom of speech. Yes, we all do have freedom of speech, but at times there are ramifications for the negative that can happen when you’re not thinking about others, and you’re only thinking about yourself.

“I don’t want to get into a word or sentence feud with Daryl Morey, but I believe he wasn’t educated on the situation at hand, and he spoke, and so many people could have been harmed, not only financially, but physically. Emotionally. Spiritually. So just be careful what we tweet and what we say, and what we do. Even though yes, we do have freedom of speech, but there can be a lot of negative that comes with that too.”

James tried to clarify on Twitter that he had meant only that Morey had not considered the consequences of his comments for the emotional and physical safety of the teams and players who were in China when they were made. He wasn’t trying to comment on Hong Kong and China.

Let me clear up the confusion. I do not believe there was any consideration for the consequences and ramifications of the tweet. I’m not discussing the substance. Others can talk About that.

My team and this league just went through a difficult week. I think people need to understand what a tweet or statement can do to others. And I believe nobody stopped and considered what would happen. Could have waited a week to send it.

James is under no obligation to comment decisively about foreign affairs. But he is the sport’s greatest active player, a noted commentator on racial justice in America, and someone who has been outspoken about racism and politics in the past.

James has called out President Trump for stoking racist sentiments and held a rally with Hillary Clinton during the 2016 presidential race. His comments on China managed to anger both liberals and conservatives, disappointing progressives who have often cheered his comments on racial justice and feuds with the president while proving useful social media fodder for conservatives who were already critics.

Many of his progressive fans have certainly noticed free speech and the cause of human rights seem to apply only in selective circumstances for the NBA. The online right meanwhile called him subservient to Communist China, and Republican senators decided to take an opportunity to chastise James for the Chinese government’s actions.

The @NBA had a tough week?

You’re right, @KingJames. People need to understand what a tweet or statement can do to others. https://t.co/pCIQ305rf4

The firestorm over James’s comments neatly encapsulates the problem the NBA, which generally wants to be seen as the progressive American sports league, has faced with the China crisis. Every news story must mention that the league and its players have billions of dollars in business in China. That lends itself to the unavoidable conclusion that free speech is conditional in the NBA — up until it puts the money at risk.

As Tom Ziller wrote for SB Nation, after the league rebuked Morey:

The message to NBA players, coaches and staff is that you can be as political as you want so long as it only offends people without real power to affect the bottom line. Silver isn’t afraid of Trump’s ability to hurt his business, so NBA personalities can say whatever they want about him. But his stance is different when it comes to Chinese President Xi Jinping, who could theoretically rocket the league right out of China if he wanted. That reality informs the NBA’s response, and so far, Silver and the league look awfully bad.

The NBA’s courtship of China has an interesting and complicated origin — in the telling of this Ethan Strauss story for the Athletic, the bottom line seems to be that the NBA might be maxing out its market share in the United States. China is seen as fertile and potentially lucrative new ground, a country with millions of fans who first came to the game following Rockets star Yao Ming.

The basketball league certainly isn’t alone. As Terry Nguyen wrote for Vox, many US brands struggle to have it both ways; they risk censorship from China if they are seen as critical of the country, but they could alienate their US customers by kowtowing to an authoritarian government suppressing pro-democracy protests. So they equivocate.

But, however fairly, more was expected of James. And of the NBA. This is a player who is the subject of serious speculation about a future run for political office, though this is not the first time a political crisis involving China has been a PR stumble for James. This is a league with head coaches like Steve Kerr, proudly outspoken on domestic issues (and often against Trump) but who have hushed up over Hong Kong.

Strong majorities of both parties hold unfavorable views toward China, according to the Pew Research Center. Getting squishy on China and free speech isn’t usually a winner in America with progressives or conservatives. The latter, long angry with James for his barbs at Trump, simply saw this as confirmation that Bron is with the communists. But many of the former are disappointed too. This was a star and a league they had come to expect a little more from.